Beauty for Freedom Uses Fashion to Bring Awareness to Fight Against Sexual and Gender-Based Violence.

Beauty for Freedom (BFF) develops creative workshops that engage the industries of Beauty, Art, and Fashion as powerful allies in the fight to end human trafficking and sexual violence. Our creative art programming illustrates a holistic 360 degree design of our empowerment programs from concept, design, marketing, production, auction and exhibition.

BFF’s 4th year supporting Sexual Assault Awareness Month and Denim Day, a day of protest and advocacy for survivors of sexual violence, we provided our mentoring & empowerment programming to High School of Fashion Industries in NYC that culminated in co-creating a couture collection and marketing campaign supporting human rights.

Beauty for Freedom has teamed up with Celestino Couture and Steps to End Family Violence to teach the teen designers in creating a capsule collection using recycled denim that has been hand-painted by survivors of labor trafficking and at-risk youth supported by Challenging Heights, a survivor-led organization battling the crisis of child labor trafficking in Ghana, West Africa, whom Beauty for Freedom taught in Summer 2018.

The couture collection includes 5 designer garments that have been photographed as part of our Sexual Assault Awareness Month Campaign featuring actress Zazie Beetz, actress and activist Indya Moore, and former NFL player and LGBTQ Advocate Wade Davis, among others. Our campaign hopes to engage New Yorkers in the fight to end sexual violence and raise funds and awareness for Beauty for Freedom, Challenging Heights, and Denim Day’s survivor advocacy programming.

The Denim Day movement was originally triggered by an Italian Supreme Court ruling where a rape conviction was overturned because the justices felt that since the victim was wearing tight jeans she must have helped her rapist remove her jeans, thereby implying consent. The following day, the women in the Italian Parliament came to work wearing jeans in solidarity with the victim. The first Denim Day campaign was created in response to this case and the activism surrounding it.

Since then, wearing jeans on Denim Day has become a symbol of protest against erroneous and destructive attitudes about sexual assault. In this rape prevention education campaign, community members, elected officials, businesses and students are asked to make a social statement with their fashion by wearing jeans on this day as a visible means of protest against the misconceptions that surround sexual assault. The 20th Annual Denim Day is Wednesday, April 24, 2019.

A large part of our Beauty for Freedom platform includes mentoring and nurturing high school students and college students engaging them in advocating for human rights as equal rights. These youth are uplifting their schools with positive messaging around equality, tolerance, freedom and many other issues affecting communities locally and globally. They are the future voices for global issues.

Our 10-12 week mentoring and leadership program curriculum teaches life skills to high school and college students through our Beauty for Freedom mentorships and workshop series. This platform cultivates change-making ideas as our students execute their own ideas for advocacy campaigns and product lines supporting human rights activism. The youth are nurturing their advocacy and activism skills as they empower and support local non-profits, on-campus youth groups, local advocacy platforms and their own hopes and dreams of changing the world. Our students are encouraged to utilize their innovative ideas on philanthropy and advocacy in a creative open space and to collaborate with fellow classmates building confidence and a sense of community within their teams and schools. 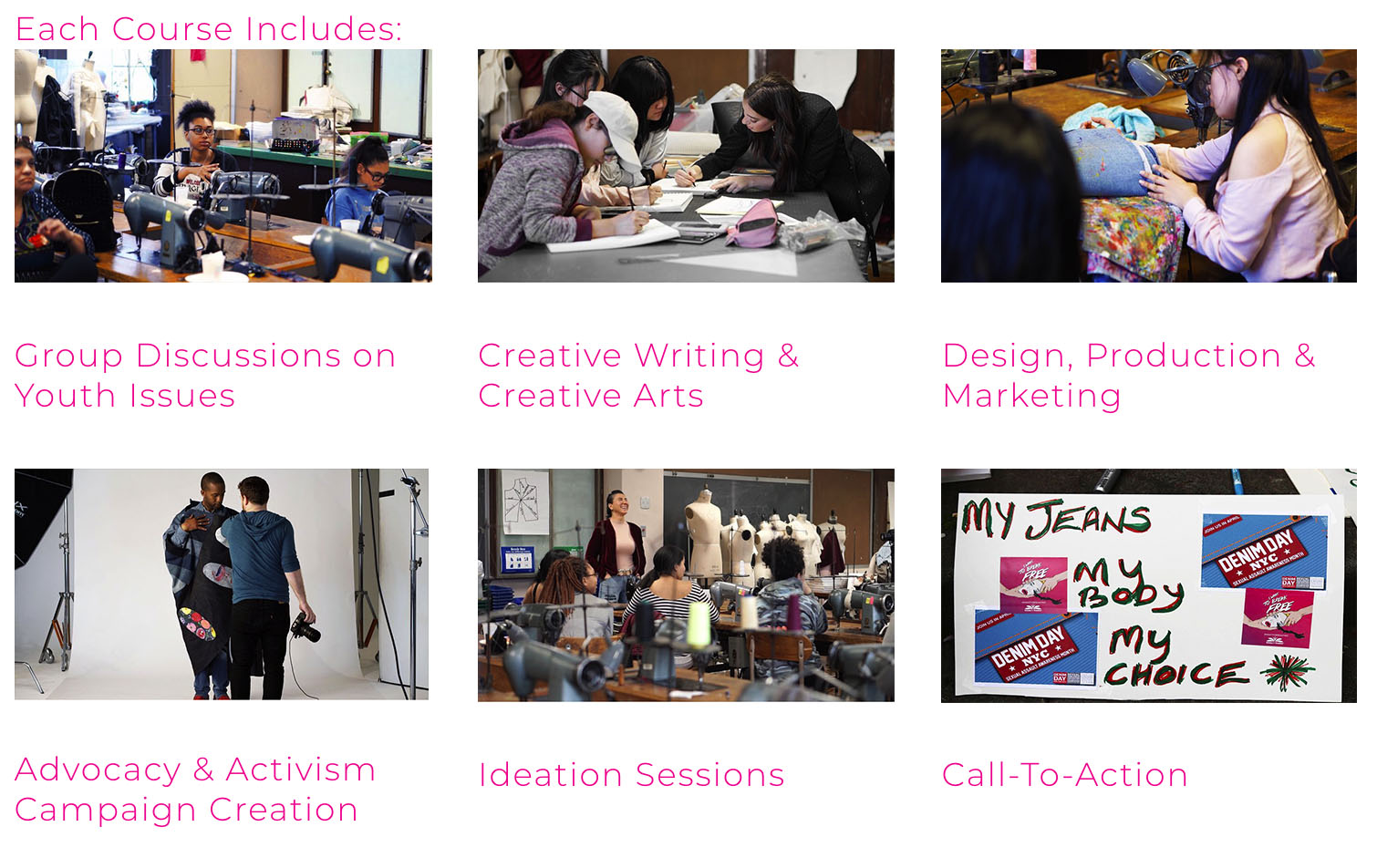 Beauty for Freedom Uses Fashion to Bring Awareness to Fight Against Sexual and Gender-Based Violence.

Beauty for Freedom (BFF) expanded our partnership with City-As School and developed creative design workshops that include co-creating a denim collection, mentor and empowerment programming and a marketing campaign to raise awareness to end sexual and domestic violence.

A huge part of our Beauty for Freedom platform includes mentoring and nurturing youth and artists getting them involved with the fight to end sexual violence and trafficking globally through their artwork and united voices for causes like Denim Day NYC! We recently worked on a project producing a fashion art video series and photographic series in collaboration with BK Style Foundation and Council for Fashion and Social Change and featuring the incredible designs of the City-As-School High School Design Students in collaboration with professional artists and designers! Supporting our youth as they go out into the world and build their voices that resonate messaging of freedom and of equality for all is IMPERATIVE!!!!

The couture collection includes 5 designer outfits and accessories from hats, shoes and jewelry that was photographed as part of a Sexual Assault Awareness Month campaign featuring models and activists Mari Malek, Vika Levina & Kadi Correia, among others.

“We are truly excited to launch the Denim Day NYC Campaign in honor of all of the survivors of sexual and domestic violence globally. Their voices and bravery inspire us to do our part in the fight for all survivors!”- Monica Watkins | Founder Beauty for Freedom

“BK Style Foundation is committed to supporting causes that affect our community, and we recognized Denim Day NYC’s mission and think it’s very important that we support a cause that touches everyone. Sexual assault/Violence is an epidemic in communities globally and we want to do our part to raise awareness.”- Rick Davy | Founder/Executive Director BK Style Foundation

Anti-trafficking organization Beauty for Freedom, BK Style Foundation and the Council for Fashion and Social Change along with professional and visual artists Katya Akuma, Fabiola Jean-Louis, Butch Diva, Monica Watkins, Chantel Valentene and Jerry Chu have partnered with City-As School in creating a Denim Day NYC Video and Photographic Campaign raising awareness for the survivors of sexual and domestic violence.

Check out the information on the project and please donate used denim and sewing supplies by emailing us at info@beautyforfreedom.org 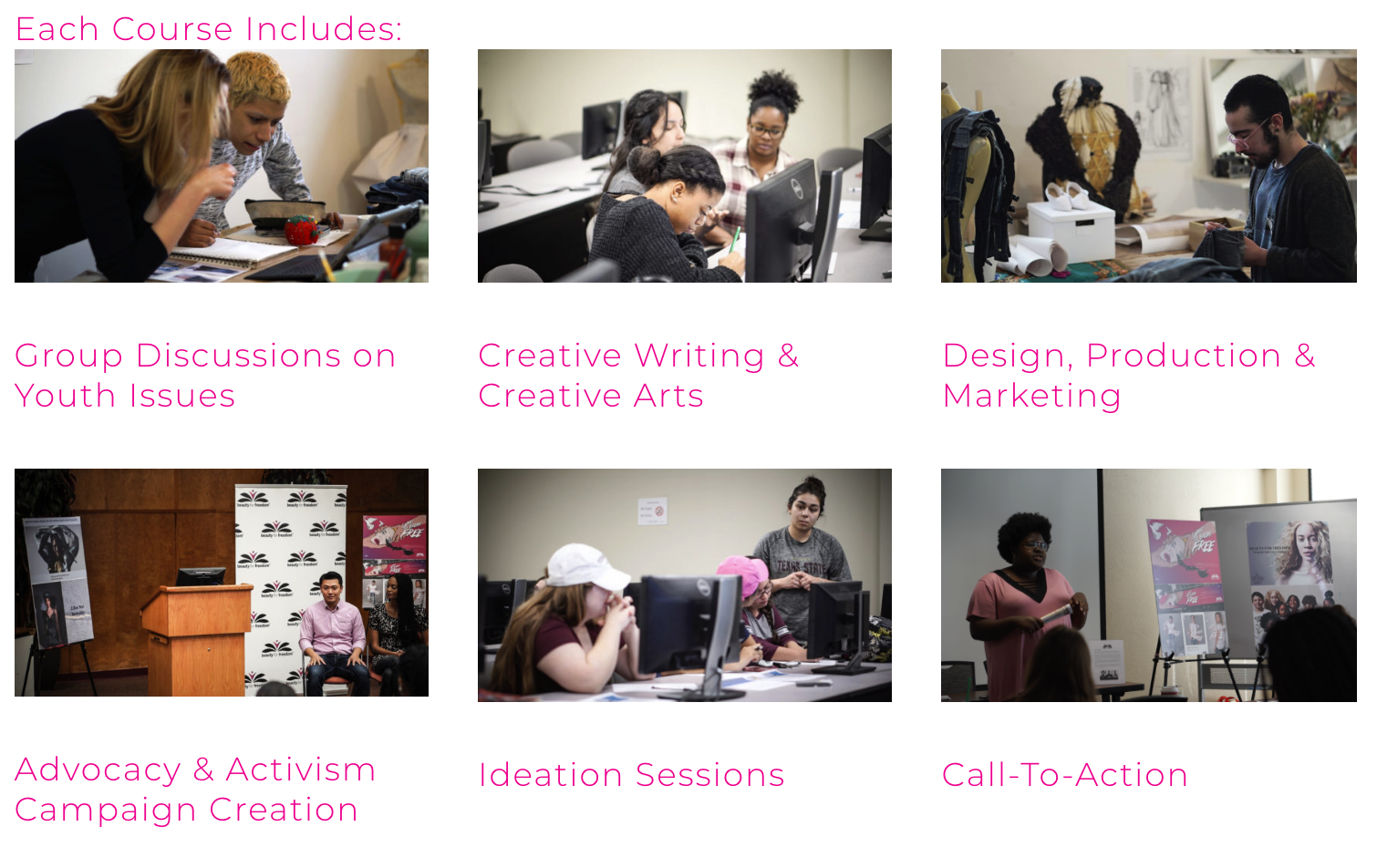 Launched April 2017, the campaign’s mission is to engage New Yorkers in the fight to end sexual and domestic violence and to raise funds and awareness for Denim Day NYC’s survivor advocacy programming. The second installment of the video and photo series created by CTM Sisters Productions in partnership with Beauty for Freedom and Council for Fashion and Social Change, features the collaborative designs of visual artist professional artists and design students from City-As School with musical scoring in an original musical composition by City-As School music students featuring voices of several brave survivors of sexual violence, domestic violence and advocates tackling issues of victimization.

Beauty for Freedom Uses Fashion to Bring Awareness to the Fight Against Sexual and Gender-Based Violence.

Beauty for Freedom and BK Style Foundation, partnered with Steps to End Family Violence in creating the Denim Day NYC #IAmNotInvisible Video and Photographic Campaign raising awareness for the survivors of sexual and domestic violence.

Launched in April 2016, the campaign’s mission is to engage New Yorkers in the fight to end sexual and domestic violence and to raise funds and awareness for Denim Day NYC’s survivor advocacy programming. Beauty for Freedom partnered with City-As School to teach selected students multimedia programming that resulted in a multi-layered video & photo campaign that featured several brave survivors and advocates and tackles the issues of victimization and feeling invisible and marginalized in regards to sexual violence and domestic violence.

“We are truly excited to launch the #IamNotInvisible Campaign in honor of all of the survivors of sexual and domestic violence globally. Their voices and bravery inspire us to do our part in the fight for all survivors!”- Monica Watkins | Founder Beauty for Freedom

Campaign Title: “I am Not Invisible”